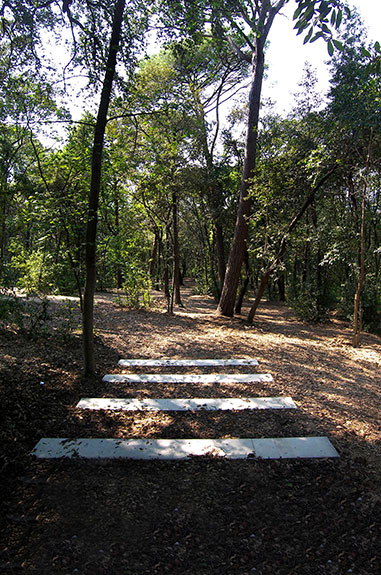 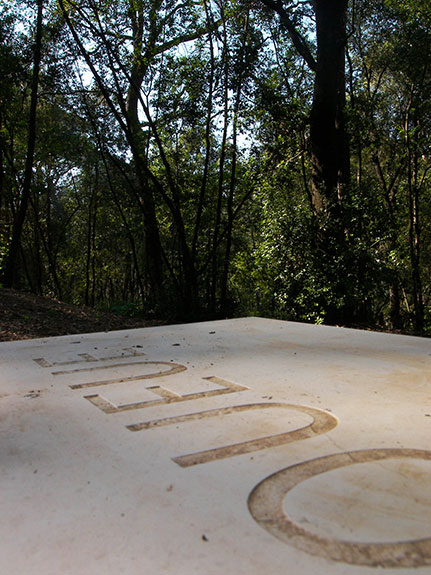 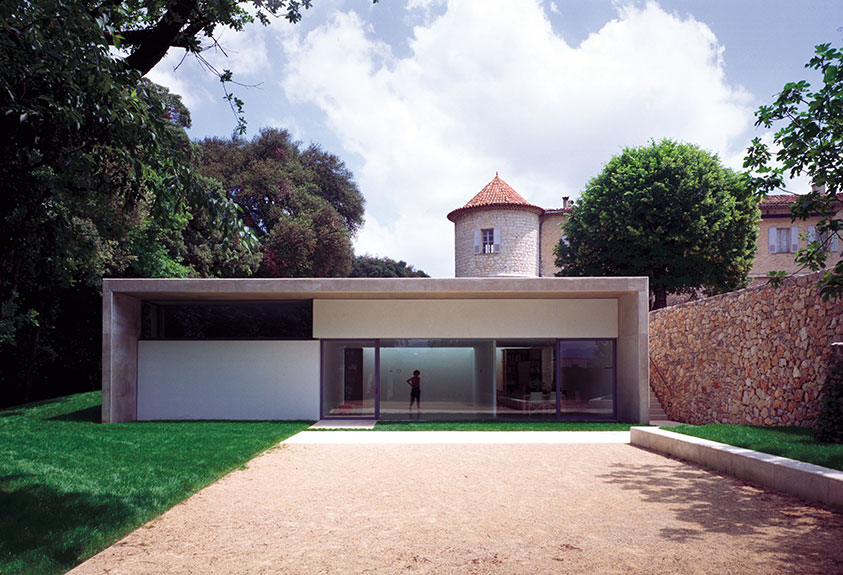 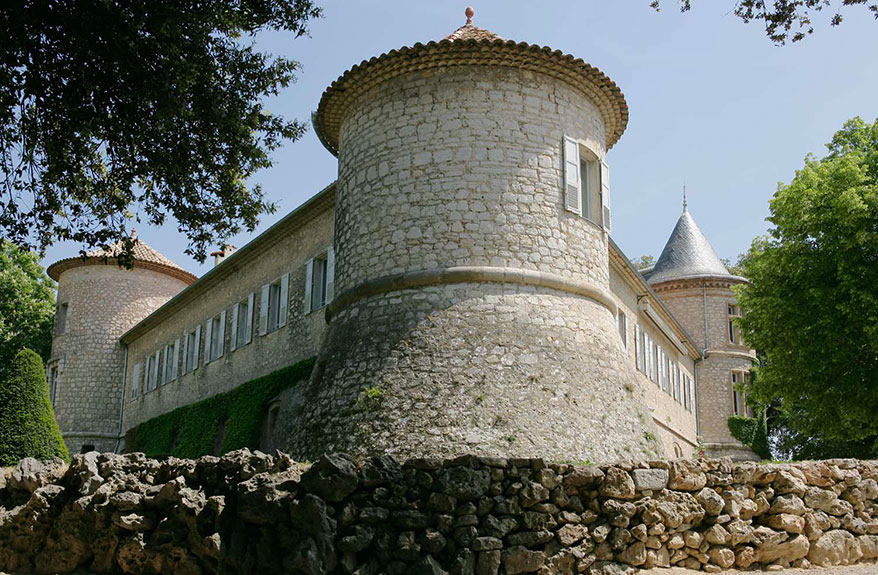 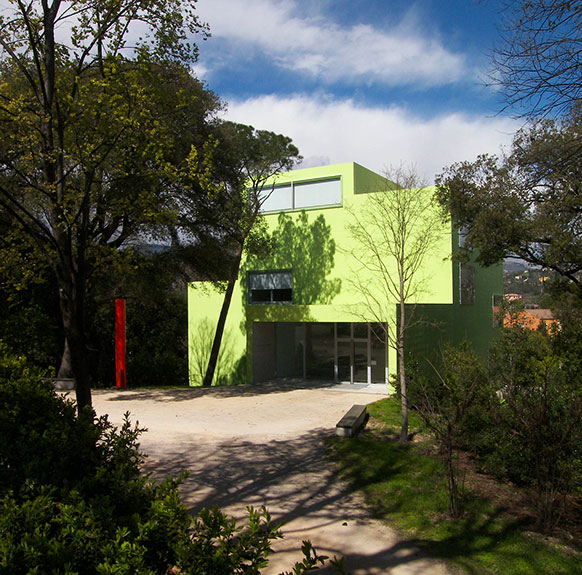 Built by Jean de Grasse at the beginning of the 16th century (1504-1510), Mouans Castle remained the Grasse family's property until the year 1750, and then it belonged to the Villeneuve family (1750-1789), to the Durands of Sartoux, then to the Peguihlan of Sartoux who finally sold it to the Mouans-Sartoux's municipality in 1988. During religious wars, the Castle was a bastion for the « reformed ». Its lord, Pompée de Grasse was a protestant. At the Revolution, the castle is severly damaged. The two castle's wings were reconstructed around the year 1820. The two towers, the East and West ones, were only rebuilt at the end of the 19th century. In the middle of the 20th century, the East tower was lowered and covered with tiles.

What is interesting about this castle is that its initial structure is well preserved, with its rare triangular shape in France. In 1990, the Espace de l'Art Concret opened its doors, giving birth to a contemporary art center, which will quickly be famous around the world.

In the park, facing the Castle, a protruding volume, painted in vivid Yellow-green, rise as a luminous sign in the Espace de l'Art Concret woody environment. The turriform building is composed of 5 levels, linked by two stairs and one elevator, around which you can find : a wide welcoming space open to nature (107m2)/ 15 exhibitions spaces (645m2) designed to create rhythm depending on the dimensions, the heights, orientations varying in each rooms / a conference space (140m2) / a documentation room/ offices (89 m2) / a storage space and technical space (235 m2). The energy sensed in this architecture is strongly linked to the space composition and the materials chosen (on the spot poured concrete walls, raw and plain).

The Donation Albers-Honegger's rooms provide a beautiful parallel between them and the castle ones, playing with the same contrasts between the outside and the inside, the close and the far away, nature and culture. Their arrangement along the facades, their lighting brought by broad lateral openings, make them seem like rooms of a villa, or a great house. Windows are place at visible heights and protected by glass screens outside, made to reflect the nature around. As a result, the donation's outside face create a subtle shadow game, between the positive ones, on the windows, and the negatives ones on the painted walls, shadows created by the forest surrounding the building. The building's color predict a possible patina, and also create two radically opposed effects : Bringing light, contrasting with the environment, but at the same time , a pleasant accumulation of color with the trees around.

The dense, minimal and abstract shape of the building creates a beautiful link with the art within, and participates to the visual « thought », to the research, to the observation linked to Gottfried Honegger's philosophy « Learn how to look, because looking is a creative act. » The furniture are an integral part of the building spacial organization. It is used to stress the relationship between man and art, and his potential dialogue, internal or external.

Discrete building, enclosed in the slope to limit its visibility from the castle, its localization is also practical, as it creates a plaza above the forest, creating a better link between the castle and its site.

Made in a square plan, which match the triangular shape of the castle, it consequently exploits the Concrete Art's vocabulary.

This small building pushes its spacial limits thanks to zenithal lighting, coming from the plaza's basin, and the different facades. At the entrance, on the piazza, framed by a concrete arch, the facade's composition troubles the understanding of the structure, playing with different opacities and transparencies in materials. The wide polyvalent space is in direct contact with nature. On the forest side, the mineral concrete wall is striped with wooden boards. It is colored by the use of beige and grey sand, referring to the castle 's stonework. Against the retaining wall, a small stair leads to the workshop’s spaces and their forecourt. The facade volumes are created by wooden planks placed back in the concrete casing.

These wooden planks were sandblasted so the wood veins can be visible, and then nailed – and not screwed – to bring dilatation's differences when nailed. The concrete wall poured in one piece, has a monolithic aspect where no form modification or correction is visible.

The Mouans-Sartoux Castle's park was rearranged by Gilles Clément, due to a municipality's commission, with the help of the Culture Ministry, the Provence-Alpes-Côte d'Azur regional council and the Alpes Maritime department.

This project was made to enhance the site topography and, thanks to the planted species diversity, has a large flowering cycle. Seasons passing by, different park's areas flourish and give an invitation to walk around.

This rearrangement made with the help of François Navarro, a landscaper, was designed to reveal the initial park's uses, and also accentuate the visitors' circulations between two garden's parts : the « Clairières des jardins » located around the castle, dedicated to light, order and geometry, and the « Bois des transparences » rhythmed by incentive paths. And it is lime trees, shading trees, which structure the space. The light is distributed gently everywhere. A wide square platform in front of the castle is used to host summer events, and next to it, a new meadow with olive and fig trees.

The plum trees’ terrace with flowers and glycines at the North of the Castle is the first step to the « Bois des Transparences ». In the wood, a group of small clearings, punctuated by stone pedestals, offers a real course, going down the small bridge over le Rougeon. On each pedestals is engraved a common plant name :

« In the green oak undergrowth, 25 limestone pedestals made at the dimensions of an existent vestige are used as seats, but also to bring light and also as fountains. On each one of them is engraved a common french word : « agneau, gueule, amour, étoile, griffe, bâton, barbe, etc (...)

Each of those words have their corresponding plants : Agneau chaste (Vitex agnus-castus) with its late summer blue flowers, Gueule de loup (Anthirrinum majus) with crimson spikes, Amour en cage (Physalis sp.) with soft orange fruits, Etoile (Ornithogalum umbellatum), small lights on the ground, Griffes de sorcières (Mesambryanthemum sp) tighten on the rocks along the sea, Bâton de Jacob (Asphodelina lutea) ephemeral golden shaft, Barbe de Jupiter (Anthyllis barba-jovis).  The under-wood stones represent a paper chase which is inspired by the vernacular language poetry, the strict scientific language, the unknown yet present biological diversity, the necessity to, then, preserve it, and, to do so, to first acknowledge it. From this 25 words, we can build a story, chose an order, talk about the seasons, speak about the differences, the similarities, discover the plants' complexity, whether they are insignificant or major ones, understand their uses, their development over time. We can also sit on the stones and search for nothing scientific in those words. Dream : nobody can steal us this moment of freedom. The under-wood is also that. »