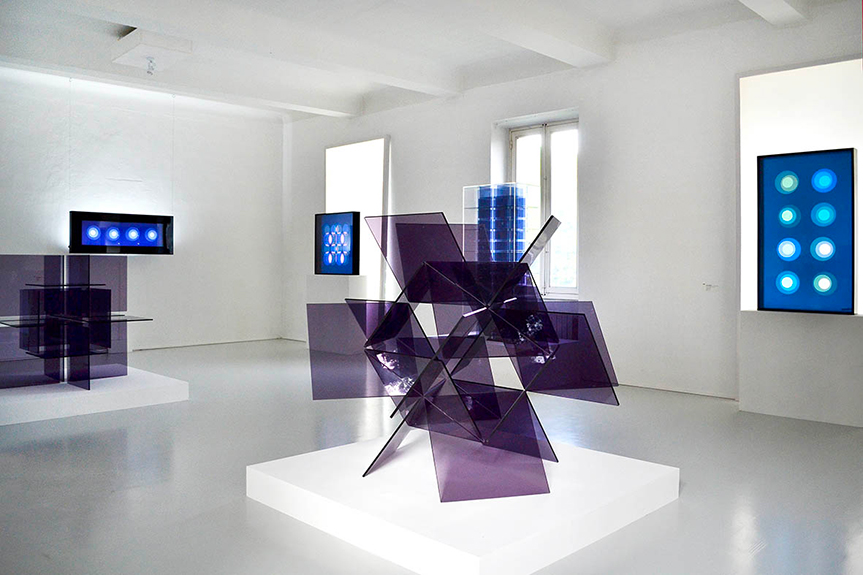 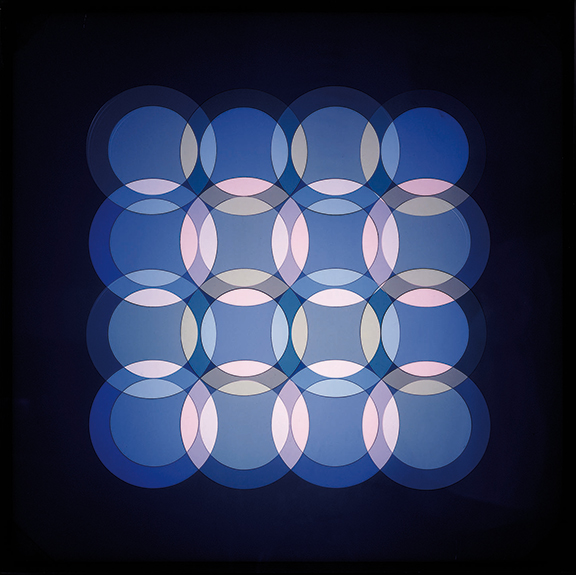 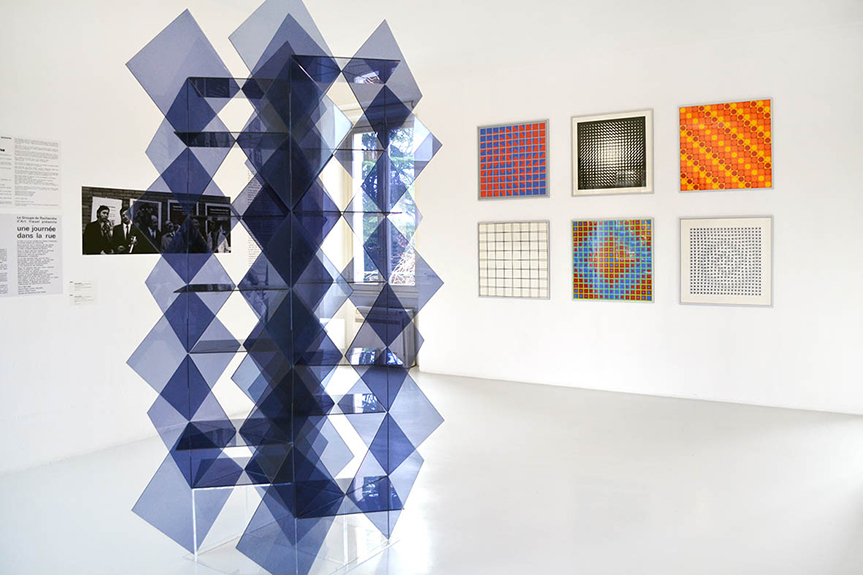 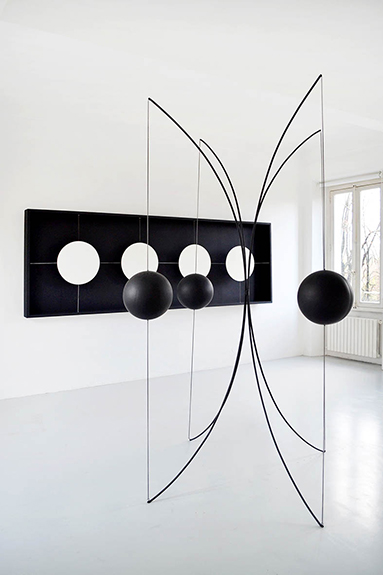 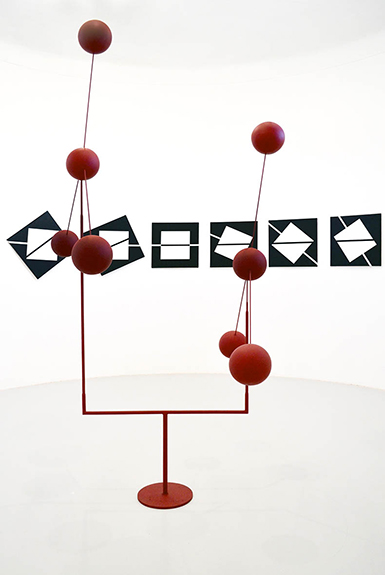 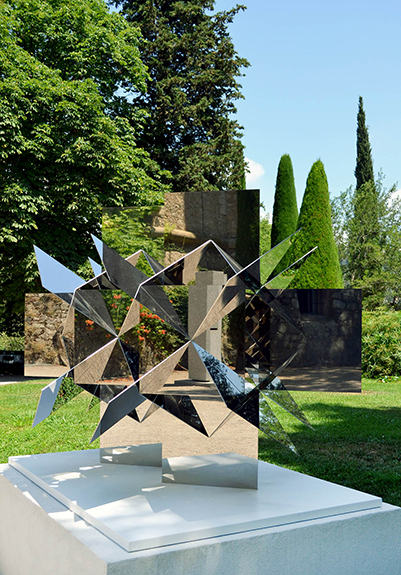 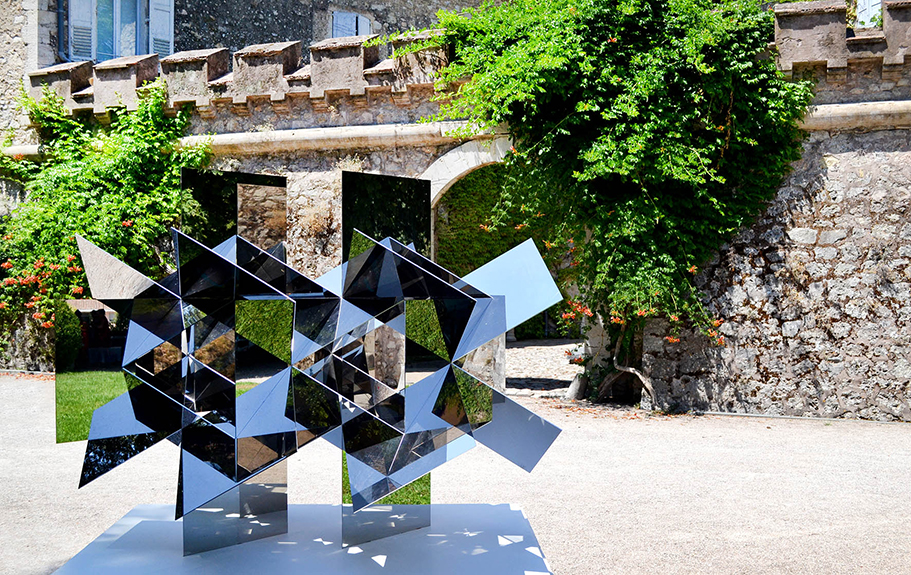 This exhibition
received support from

Francisco Sobrino trained first at the Madrid School of Arts and Crafts and then at the National Academy of Fine Arts in Buenos Aires and by the end of the 1950s he was going down the route of geometric abstraction. Like several artists of his generation working at the same period, he opted for a pared-down, strictly geometric formal vocabulary which enabled the viewer to immediately understand his art in a non-subjective way.

However, although heir to avant-garde movements, Sobrino’s approach marked a turning point by disregarding the autonomy of the work of art. He explored combinations of patterns and rhythm, important to Concrete Art, not as a way of dealing with compositional issues but rather of dealing with the fundamental questions raised by art in the1960s which were perception and motion.

His gouache on cardboard series from 1959 provides subtle formal sets of mathematical sequences which mostly make the composition appear to swirl. In certain works, his use of primary and complementary colours disrupts our perception even further: relief and depth seem to appear in compositions that are quite deliberately flat. In response to the logical patterns of these initial works came his works focussing on random movement, wall assemblages and sculptures, with motion created by the viewer activating metal rods or springs in works such as the 1969 Libres dans le vent (Free in the Wind) and the 1970 Sphères-Pulsations (Spheres Pulsations).

Sobrino’s works were two-dimensional, but this way acquired relief so they could play with space and light, becoming open, participative and at times even penetrable. Sobrino chose to use modern materials such as plexiglass and mirror polished steel to create structures, often kaleidoscopic, with the aim of creating ever greater interference between the work, the viewer and the surrounding environment.

Mirror polished steel and aluminium, for example, freed the artist to explore space: the many different sides of his Structures permutationnelles (Permutational Structures) (from 1964 onwards) have the effect of multiplying the reflections of light and so transforming the sculpture into a huge artwork of a centripetal nature, forcing the spectator to walk around it. With works that were “open” both in their composition as well as in the experience they offered, Sobrino’s art questions the range of possibilities in the object /human eye relationship and probes this divide - a sort of elusive time-space - between what is being perceived and the person perceiving.

From the early 1960s onwards, through various activities with GRAV, for example “Journée dans la rue” (A Day in the Street) in 1966, Sobrino championed this way of getting viewers to experience works of art. His determination to release the spectator from a form of passivity akin to mere contemplation of the artwork naturally led the artist to work in public spaces. In 1965, he built his first architectural sculpture in Sarcelles, a Structure permutationnelle (Permutational Structure) in stainless steel. Other projects in Europe and America followed, gradually focussing the artist’s attention on natural energy sources which were easy to access when working outdoors. As a result, from 1976 onwards, Sobrino became interested in solar energy and in 1981 he incorporated solar cells into the first renewable energy sculpture.

By playing real tricks on the eye, Francisco Sobrino’s works examine the complex nature of perception – as they immerse the viewer into visual instability where virtual images and real images are constantly merging.